Slugcat's controls feature a variety of advanced movements, mostly unexplained in-game. This page exists to detail the variety of moves slugcat can perform, and how to do them.

Pulling up onto ledge[edit | edit source]

When hitting a wall just below a ledge, holding forwards and pressing jump allows slugcat to climb up. 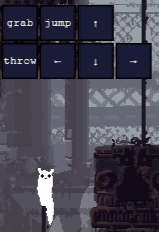 Slugcat will slide down walls when holding into the wall.

Wall-jumping is performed by pressing jump while sliding down a wall (holding into the wall), immediately switching holding direction to the other wall and tapping jump as soon as Slugcat comes into contact with that wall.

It is still possible to jump a few frames after running off an edge. This can be used to maximise horizontal jump distance, or safeguard against tight jumps.

This can also be done off of poles.

Entering the crouching position and holding jump until Slugcat’s back is arched, then releasing, allows for a charge-pounce. For almost all pounces Slugcat is subject to aerial drift, and so holding forwards mid-pounce allows the player to maximise Slugcat's horizontal range whenever jumping or pouncing.

This gif shows the farthest slugcat can extend over a ledge while crouched, useful for maximising charge-pounce distance.

Tapping up immediately after charge-pouncing puts slugcat in an upright position, giving it more height. This can help grab ledges upon landing.

Throwing rocks or spears during a jump or pounce increases horizontal velocity, allowing slugcat to travel further than normal jumps and pounces. This is most effective when done at the start of a jump.

Note: Throw-boosting can be used at the start of any aerial move to increase speed / range.

This can be done with two objects to further increase speed, optimally either out of a charge-pounce or max length roll-pounce (Explained later in guide).

Backflips are performed by jumping immediately after turning around. Note that the leftwards press near the end of the move is only to prevent Slugcat from falling off the platform.

Turn-hopping involves repeatedly jumping after turning to conserve turn momentum and cover ground quickly. Momentum conserved this way only depletes when in contact with the ground, so will last longer with more precise and better timed jumps.

The Five Pebbles region features unique controls, which for the sake of spoilers are not listed here. Info on the controls can be found on the page for the region.